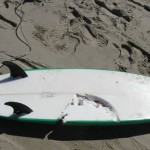 Santa Barbara news sources are reporting that a shark attack has claimed a life at Surf Beach in Northern Santa Barbara County. Barely two years ago, Lucas Ransom was killed when a great white shark bit off the majority of his leg in a tragic incident. Noozhawk reports: "A 38-year-old man was fatally injured Tuesday when he was attacked by a shark while surfing at Surf … END_OF_DOCUMENT_TOKEN_TO_BE_REPLACED