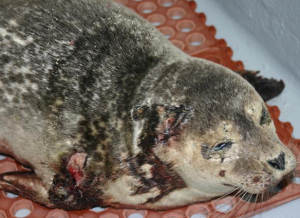 On March 9, at least two harbor seals were killed by a 15-foot great white shark, approximately 30 yards offshore from their rookery located just east of the Venoco Pier in Carpinteria. The first attack occurred at approximately 10:55am followed by the second at 11:20 AM.

The harbor seal rookery is home to approximately 300 animals that wallow on the beach and feed just offshore. Each year the beach is closed from December 1 through May 31, so adult harbor seals can breed, pup and wean their young unimpeded by beach walkers and dogs. The rookery is looked after by Seal Watch volunteers who monitor the health, growth and numbers of the rookery.

Seals are easily observed 100 feet above on the Carpinteria Bluffs, where one individual was fortunate enough to witness the feeding frenzy. Vic Hypes, a new Carpinteria resident, witnessed an explosion of feathers as gulls fled the scene when a dark pool of blood surfaced and swirled with the rush and power of the great white.

The carcass was retrieved from the beach after it washed ashore where the bite marks were examined. Thanks to pictures taken of the dorsal and caudal fins, a zoologist at the Santa Barbara Museum of Natural History was able to confirm that it was indeed the same Great White Shark responsible for both attacks. On Friday the City of Carpinteria issued a warning for local fisherman and surfers to take caution when using this area.

In the last 130 years the great white has been responsible for 64 human deaths worldwide. California is the white shark attack capital of the world with seven recorded fatalities. The chance of a surfer being attacked by a great white is extremely rare but that doesn’t stop the shark’s presence from having an effect on our local beaches. Tyson Parsons, a regular in the Rincon line up for the last seven years, paddled out just south of the Seal Preserve that following Saturday. When asked which shark is the most frightening, Parsons replied “great white” without hesitation. Although these sharks are at the top of the oceanic food chain, they don’t purposefully eat humans. Usually they mistake us for a seal or sea lion but due to their huge mouths and razor sharp teeth, the damage done from the first bite is often fatal.

It’s no surprise many surfers are afraid of the great white and chose to stay out of the water after the sightings. When asked how he deals with the knowledge of Great Whites in the area, Parsons replied, “I don’t think about them, but if I saw one I would get out of the water.”