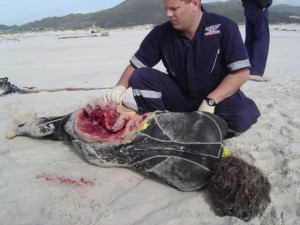 This re-enaction shows the potential severity of a large shark attacking a surfer.

UNBELIEVABLE NEWS… hot on the heels of last week’s fatal shark attack in Western Australia, French Authorities are reporting today that 22-year old surfer Alexandre Rassica was attacked and killed in the Indian Ocean, in waters off of Reunion Island. This makes for the third deadly shark attack since last year, with attacks also taking place in June and September of 2011.

UPDATE: From the comments section of a local Reunion Island website – translated poorly from French:

I had the misfortune of attending the opening scene of the sad tragedy …
I was with my brother and his girlfriend, we launched the alert, warned the emergency, people have to water it with Alexander the successful bring him to shore, my sister in law have started the massage while waiting for rescue They arrived very glass but in vain … his heart is not gone.
I offer my condolences and I have a thought for the relatives and the family of Alexander.

Historic records show that the majority of unprovoked shark attacks had taken place in the months of summer. Recent years have shown a change in this trend, especially when it comes to surfers and divers. With today’s increasingly advanced designs and technology for wetsuits, people are now able to stay on or under water for longer hours and withstand lower temperatures at the same time.

What You Can Do to Avoid or Survive Shark Attacks

* Avoid swimming alone or when few people are around and in low-visibility areas.
* Avoid swimming with schools of fish. Doing so may cause their pattern of movement to change, which could cause sharks to launch a premature attack.
* If you do spot a shark nearby, avoid thrashing needlessly or panicking in the water. Unnecessary and excessive movement will only attract sharks more.