We have received information from an extremely reliable source who spotted several mangled seal corpses on the beach near Bixby Ranch. Remember, the recent fatal attack in Solana Beach was preceded by several seals seeking shelter on the beach. Apparently, three barely recognizable corpses were brutalized by a large predator before they were able to securely obtain refuge on land. Based on the recent and hisotrical high level of Great White Shark activity in these waters, one could responsibly infer the carnage was the result of a Great White Shark attack.

This should be viewed as a very ominous sign and, again, is a testament to the extreme level of danger present in the waters of Northern Santa Barbara County. Anybody entering those waters should surf at their own risk as Cojo is one of the sharkiest spots along the California Coast. Depending on the time of year, we have seen Great White Shark activity at Bixby and Hollister Ranch that is the equivalent to and even exceeds the infamous Farallon Islands. 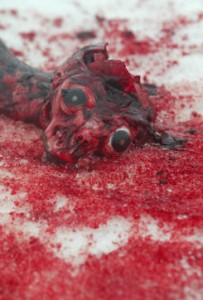