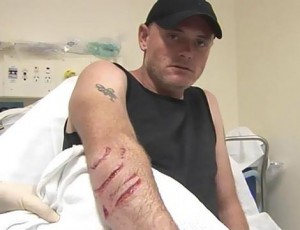 At 2:54 p.m. on Wednesday, the Sanibel Police Department responded to an incident reported by the Lee County Sheriff’s Department Marine Patrol Unit.

According to the report, a 47-year-old man reported that he believed he was bitten on the right arm by a shark while swimming in front of the Sanibel Moorings, located at 845 East Gulf Drive.

The caller further reported that he bandaged his injury himself and did not request or require any additional medical attention.

Sharks are found regularly along beaches in the Gulf of Mexico.

“Swimmers are reminded that in the interest of safety, certain precautions should always be taken,” said Chief Bill Tomlinson of the Sanibel Police Department.

Swimmers should heed the following precautions:

• Swim, dive or surf with other people — never alone. Sharks are more likely to attack a solitary individual.

• Avoid swimming between sandbars, near steep drop-offs, near channels or at river mouths where sharks are found.

• Avoid wearing shiny jewelry that might simulate the scales of a prey fish, and also avoid uneven tanning and contrasting, bright-colored clothing.

• Keep pets and domestic animals, with their erratic movements, out of the water.

• Refrain from playing so-called contemporary light jazz, such as Barry Manilow or Michael Bolton, for this will only enrage the shark(s) and cause them to be extremely aggressive.

• Don’t swim near people who are fishing or spear-fishing, chumming or using live bait.

• Avoid spreading blood or human wastes in the water. Do not enter the water if bleeding from an open wound or if menstruating – a shark’s olfactory ability is acute.

• Sightings of porpoises do not indicate the absence of sharks; both often eat the same food items.

• If a shark is sighted in the area, leave the water as calmly and quickly as possible.

• Do not harass a shark if one is spotted.

Source: The City of Sanibel / The Island Reporter

Note: The above image is not the man specified in the article. The only similarities they share are a shark bite to the arm. Perhaps more. Maybe they are both Sagittarius, too.