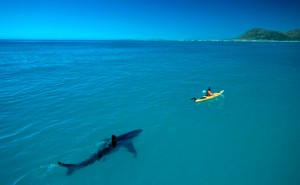 When the shark appeared, the husband and wife in their double kayak had paddled for only 10 minutes, reaching just past the mouth of the harbor.

“It surfaced next to us like a submarine,” said Jon Schwartz. “It was like 9, 10 feet long, directly perpendicular to us, about 12 feet away, a tiger shark, about 200 pounds. It was staring at us, right next to us. Our worst fear was right in front of us.”

The shark then looped around and charged right at them.

Schwartz’s wife, Veronica, screamed at her husband. “Put that thing in the water”” she recounted shouting. “Turn that thing on!”

In this case, “that thing,” was a Shark Shield, a new device for kayakers, surfers and divers that emits an electronic field designed to repel sharks.

The shark was close enough, Veronica said, “to see its teeth.”

“I could see its whole head,” Veronica said. “Its mouth was open. I was so scared. I will never forget it opening its mouth as it came for us.”

In the chaos of the moment, Schwartz said he remembers flipping a switch to activate the Shark Shield. They watched as the shark suddenly veered off just a few feet from them.

“It was as if the shark hit a force field,” Schwartz said.