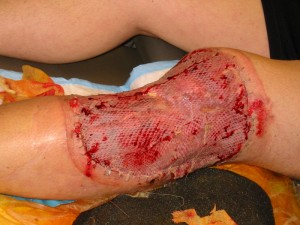 The sixteenth attack this year in Volusia County alone!!!

A 13-year-old New York girl was bitten by a shark while swimming in the ocean off New Smyrna Beach this afternoon.

The girl was in waist- to chest-deep water when the shark bit her on the right leg between her ankle and knee, said Capt. Scott Petersohn of the Volusia County Beach Patrol.

She suffered several small puncture wounds and one gash of about three inches, Petersohn said. Her name was not released.

The bite occurred south of the Flagler Approach, a couple of miles south of the area where most of the bites occur, Petersohn said. This was the 16th shark bite of the year in Volusia County, he said.

“There were tons of bait fish out there,” Petersohn said. Other swimmers said pelicans were diving into the water and dolphins were in the area, he said, all indications swimmers should get out of the water.