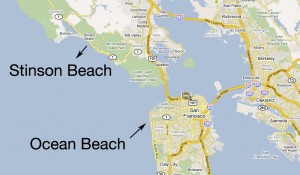 Ocean Beach is right across the bay from Stinson Beach, which was closed down for the Labor Day weekend. Both of these beaches lie within the area of the infamous Red Triangle and barely a stone’s throw from the Farallon Islands, a popular pinniped rookery and therefore feeding ground for the Great White Shark.

Maris reported the following; “There was a dense fog with the air temperature in the low 60’s Fahrenheit and water temperature in the high 50’s Fahrenheit. The surf was chest to head high. I had just caught a wave and was in the process of paddling back out when I spotted a large dorsal fin of a shark approximately 40 yards from my position and 100 yards off shore. I would estimate the height of the fin at about 3 feet with a dark gray color. I saw a bit of the shark’s back and the color was also dark gray. The shark was cruising from the South to the North just beyond the impact zone. It is hard to estimate the shark’s length but my sense was that it was 10+ feet in length.”

On August 27, 2008 Hunter Claxton was surfing at Ocean Beach at approximately 5 PM.

He reported the following; “I paddled out at Ocean Beach, San Francisco, at around 4 PM with a friend. Both of us were on stand-up paddle boards. I was on a 9’3″ board with a carbon paddle. After about an hour I was 20 yards or so outside the line-up just paddling around as I watched a group of porpoises further South that seemed to be feeding on a large grouping of fish. I glanced down into the water and saw a large shark approximately 10+ feet in length pass under my board at a depth of about five feet. The shark was swimming South towards the porpoises and fish. It came to the surface 30 yards past me and I saw the dorsal fin, which was 2 – 3 feet high, and most of the back coming out of water. The shark was dark gray in color on top and appeared from its shape and size to be a Great White Shark. I almost immediately headed back to shore and let the few surfers in my vicinity know what I had seen. My buddy was a few hundred yards south of me but did not see the shark.”

Please report any shark sighting, encounter, or attack to either The Shark Research Committee or The Fear Beneath.