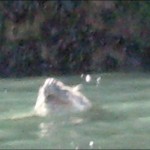 CALDEY ISLAND, WALES This beast rearing up out of the sea is thought to be a Great White Shark — snapped off the coast of Wales. Fisherman David John saw the monster emerge 100 yards from his boat. He took the pic on his mobile — but only realized how close he could have been to a killer Great White when he examined it later. David, 40, said: “At first I thought it … END_OF_DOCUMENT_TOKEN_TO_BE_REPLACED

MARIN COUNTY A second sighting of a great white shark off Stinson Beach has prompted the National Park Service to prohibit water use through the Labor Day weekend. "We had another sighting about 6:30 p.m. Thursday night by two visitors," said Chris Powell, park service spokeswoman. "Our lifeguard interviewed them and felt it was a credible sighting." The news puts a … END_OF_DOCUMENT_TOKEN_TO_BE_REPLACED