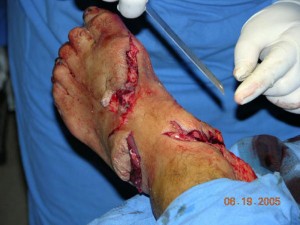 Volusia County Breaks Record for Shark Attacks in One Year

With shark attack number 23 on an unidentified surfer Sunday, Volusia County has set the record for the most shark attacks in one year, breaking the previous record of 22 bites in the year 2001 (for which Volusia County was given the dubious distinction of being the Shark Attack Capital of the World.)

The (currently) unidentified man was surfing just south of the jetty about mid-day when he sensed something biting his foot, stated Captain Scott Petersohn, the all-too-familiar spokesperson for Volusia County Beach Patrol. “It was extremely minor and he went back out surfing after a Beach Patrol officer put Band-Aids on his foot,” Petersohn said. “There were a lot of surfers out, more than usual, and good waves,” Petersohn said. “It was bound to happen with that many people on the water.”

Shark Camo, in cooperation with The Fear Beneath, have generously offered a Shark Camo decal to the victim of this shark attack! We would also love the chance to interview this historic personality for an inside scoop on this epoch-making shark attack news.