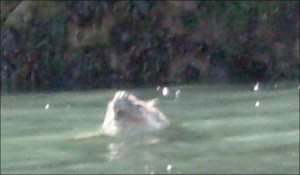 This beast rearing up out of the sea is thought to be a Great White Shark — snapped off the coast of Wales.

He took the pic on his mobile — but only realized how close he could have been to a killer Great White when he examined it later.

David, 40, said: “At first I thought it was a seal. It wasn’t until I got home that I looked again and realized what I’d got.

“You can’t mistake the shape of the head and can see an eye and the mouth. And from what I understand, Great Whites do break the water like this.

“It would make sense for it to be in that area as there are plenty of seals for it to feed on.”

David’s pal John Blair, who had taken him out on 30ft boat Summertime near Caldey Island, Pembrokeshire, said of the chilling moment: “I saw a big splash — it must have been a fair size.

“It certainly looks like a shark from the photos.

“We do get basking sharks in the area and last year a local fisherman caught a thresher shark in his nets.”

David, of Manorbier, showed the pic to Irish shark fishermen in the area — and they identified it as one of the predators.

Scientist and expert Ben Weir last night said of the snap: “The way the shark is breaching the water makes it look like a Great White.

“It is the classic way a white comes out of the water.”

Last month The Sun told how a beast thought to be a Great White swam past a North Sea submarine 120 miles from Aberdeen.