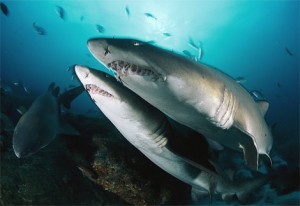 Marine science writer Susan Scott can be reached at www.susanscott.net

After a shark attack on Oahu last week and several shark sightings around the state, the Department of Land and Natural Resources included this phrase in a news release: “Experienced fishermen and scientists know that some shark species come into shallower waters during this time of year for spawning, which increases the chances of interaction between sharks and people.”

This sure got people’s attention. “If it’s true that sharks come ashore during specific times of the year,” e-mailed one reader, Liz, “why is this not common knowledge?”

It’s not common knowledge to anyone. Well, it is but … Oh, dear. Let’s just say the DLNR statement was confusing.

First, sharks don’t spawn. Spawning is the term used for fish that reproduce by casting their sperm and eggs into the water where fertilization may or may not occur. Spawning often involves swirling masses of frenzied fish.

All sharks, however, fertilize eggs internally, meaning they copulate. The males likely find mates by following pheromones released by receptive females. After fertilization, female sharks retain their eggs until they hatch and then expel the live young into the ocean.

Another confusing aspect of the DLNR statement was that it didn’t name a species. At least 40 kinds of sharks swim in Hawaii’s waters, nearly all harmless to humans.

What is common knowledge is that female hammerhead sharks come from offshore waters to Hawaii’s bays and harbors to deliver their pups each April. And even though hammerheads are inshore annually, the species has been implicated in only two, nonfatal attacks here ever. Maybe. No one is sure those two bites came from hammerheads.

When people speak of sharks and attacks in Hawaii, they’re generally referring to tiger sharks, the most dangerous species in our waters. (Great whites are dangerous too, but they’re offshore and rare.)

Studies show our tiger sharks are roamers, swimming from coastlines to 365 miles away. They can travel 30 miles in 24 hours. Besides studying tiger sharks’ movements, Hawaii researchers have also gathered clues about when tiger sharks mate and give birth in Hawaii.

UH biologists analyzed data from 318 tiger sharks caught in Hawaii from 1959 to 2005. Five showed evidence of mating, all in January and February. Females store the sperm for four to five months, followed by a gestation period of 15-16 months. The pups, then, are born in September and October. Females reproduce once every three years.

It’s crucial to note what the biologists did not learn in this study, and that’s where tiger shark mating and pupping take place. All we know is that, unlike hammerhead pups, tiger shark pups are rarely seen or caught in Hawaii’s inshore waters.

So why the increase in shark sightings around the islands? Maybe it’s just good reporting. After an attack, people are more alert to shark appearances. It’s also possible that more sharks are close to shore right now, but the reason for that is known only to the sharks.

Liz’s concern about the DLNR shark bulletin was about more than her own safety. “I’m sure there’s some good information for people so they won’t want to kill the sharks,” she writes. “It is their world, after all.”

There is good information available. I hope what I’ve found helps those concerned and aids our sharks as well.