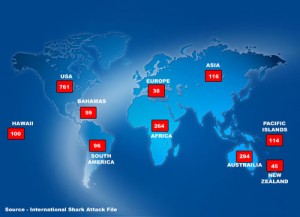 Sharks are suddenly more conspicuous at Hawaii’s beaches – and there’s no clear reason for increased sightings and attacks, experts claim. There is no denying it – sharks seem to be coming close to shore a lot lately.

For the past week, up to 15 large tiger sharks have lingered along five miles of the Big Island‘s Kohala Coast, near the Mauna Kea Beach Hotel, coming within 20 yards of shore.

Several beaches have been closed on O’ahu in the past two weeks because of sightings; and a shark attacked a surfer Tuesday at a popular Ka’a’awa surf spot called Crouching Lion.

There is no definitive reason why there are more sharks near shore, though experts suggest explanations ranging from shark mating season to clearer water — which increases shark sightings, even if there are no more sharks than usual.

The state Department of Land and Natural Resources urged everyone to exercise caution when going into the ocean.

“Do not enter the water where shark warning signs are posted; in all other areas please exercise caution when entering the water,” Laura H. Thielen, DLNR chairwoman, said in a news release Wednesday.

Several experts suggested some shark species, especially tigers, may come into shallower waters at this time of year for mating.

“There is no evidence that anything in the environment has changed to make (tiger shark) numbers any greater this year than at any time in the past,” said Kim Holland, who studies shark behavior at the University of Hawai’i’s Hawai’i Institute of Marine Biology.

“There is a possibility that these higher sightings might be associated with these sharks coming closer to shore and gathering in groups to mate, but there is no firm evidence to back that up,” he said.

Low winds and other weather conditions that make the ocean calmer can increase sightings, Holland said. “It makes it easier to see into the water to see sharks,” he said.

Several experts said sharks are often in the water, even when you don’t see them.

Randy Honebrink, spokesman for the state Shark Task Force, said September and October are believed to be when tiger sharks mate and that an increase in sightings is normal.

“There haven’t been enough studies done on tiger shark behavior to know what’s going on. Usually it’s a carcass that pulls sharks in to feed on, but I don’t think that explains what is going on off the Big Island.”

John Kahiapo of DLNR’s aquatics division said that only once during the Hawai’i County Fire Department’s helicopter flyovers have spotters seen the tiger sharks feeding on a school of fish. Otherwise, he said, they’re just “roaming around.”

“Every day we’ve been seeing them since Sept. 5,” he said. “There is no sign of anything out there that they’re feeding on. These are big guys, 10- to 15-footers, so we close the beaches for public safety. We had it happen last year for a few weeks at this time, then they just left. We don’t know why they come or go.”

Though 15 have been sighted, Kahiapo said, the tigers aren’t traveling in a pack and are spread out over five miles. The danger isn’t so much with the sharks being close to shore, he said, it’s more with people who disregard the warnings, he said.

When sharks fed on a baby whale carcass last year, some people took boats out to watch and a few people jumped into the water with video cameras to shoot the frenzy, Kahiapo said.

“Maybe they watch too much TV and don’t realize the danger,” he said.

Asked if a growing sea turtle population or overfishing could be bringing sharks closer to shore, Holland said no.

So did Stacy Hargrove, a research biologist and turtle specialist with the National Oceanic and Atmospheric Administration.

“Yes, there are more turtles in our waters,” Hargrove said, “but we’re not seeing an increase in shark attacks on turtles. Tiger attacks are one of the six leading causes of mortality for sea turtles, but that’s not the reasons sharks would be coming closer to shore more than usual.”

Tim Tricas, a zoology professor at UH and the Hawai’i Institute of Marine Biology, said the increased sightings may be more of a reflection of more people looking for sharks and more people in the water.

Tricas has been studying shark behavior the past 30 years and said he’s seen sharks several times while diving off the Kohala Coast in 30 to 40 feet of water. He doesn’t believe sharks typically look at humans as food.

“Two things have been happening,” Tricas said. “You now have protection of a lot of resources since we’re trying to recover severely depleted ecosystems, and you have a greater use of the marine environment by humans. That increases the chance for encounters.

Tiger sharks, Tricas said, have a broad diet and will eat lobster, crabs and any fish you can name. “They’ll take marine mammals and also turtles are one of their favorite foods,” he said.

Tricas, like every other shark expert contacted by The Advertiser, said sharks are around more often than you know and, more often than not, they’ll retreat and avoid a confrontation with humans.

“If you see one when you’re snorkeling, 10 have probably seen you.”