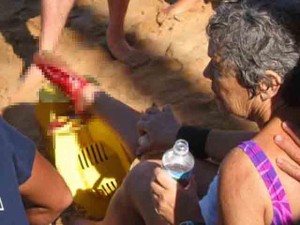 The Honolulu Advertiser covers previous survivors of shark attacks in Hawaii over the last year or so.

More than a year after separate encounters with sharks, a victim of a shark attack and the parent of a victim say things mostly have returned to normal.

But Peller Marion, of Mill Valley, Calif., an artist and writer who was attacked on Maui last year, said sometimes she has problems sleeping and feels like she’s floating in water.

And Joshua Sumait, 16, who was attacked near the same spot as a Kane’ohe man bitten off the Crouching Lion restaurant Tuesday, won’t go in those waters again now that a second attack has occurred, said his mother, Lani Sumait, of Hau’ula.

“He was freaked out because the attack was 80 yards from where Joshua came out of the water,” Sumait said, adding that the recent incident brought back all her worries and concerns about that surf spot.

After the Aug. 28, 2007, attack, Sumait wouldn’t let her son go there even though he would pester her to go, she said. But after learning about the severity of the injuries suffered by Todd Murashige, 40, he’s changed his mind, Sumait said.

“He heard about how bad the leg was and we didn’t know if the guy was going to lose the leg or not; he’s like, ‘I’m never going to go out there again,’ ” she said.

Joshua Sumait, a Kahuku High & Intermediate School junior, was bodyboarding with friends when a shark approached him from behind. Friends saw the shark and warned him and he immediately struck out with his feet, cutting a foot on the shark’s jaw, Lani Sumait said. He knows how lucky he is to be walking around intact, she said.

Ironically, Joshua and his father were on the road at the time of Murashige’s attack and were behind a truck that had stopped to give aid to Murashige on Tuesday.

Joshua may not go to Crouching Lion again, but he hasn’t stopped bodyboarding, Lani Sumait said.

Marion, 64, suffered wounds more serious than Joshua and took about four months to recuperate. She said her doctor did such a good job on the injured foot that it functions better than the uninjured one.

Marion was snorkeling at Keawakapu Beach in Kihei when the shark grabbed her right calf and foot from behind on May 7, 2007.

“I don’t think it’s safe there,” she said in a telephone interview yesterday, adding that she sometimes has trouble sleeping and feels like she’s floating in water. “I take my pillow and I sleep on the floor and I never used to do that before,” she said. “I think it has to do with the shark attack.”

Marion, who is also a psychologist, is preparing for a show in Mill Valley, and while hanging her 40-inch by 50-inch works, she said she noticed something curious about some of the abstract paintings that she completed prior to the attack.

“I had been painting turbulent oceans, boats capsizing, not sharks, but big ominous animals in the water for like months before this happened,” she said. “I said, ‘That looks like a shark attack.’ Isn’t it funny? It’s like your unconscious knows but you don’t know until much later.”