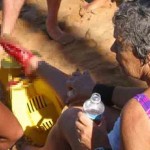 The Honolulu Advertiser covers previous survivors of shark attacks in Hawaii over the last year or so. HAWAII By Eloise Aguiar More than a year after separate encounters with sharks, a victim of a shark attack and the parent of a victim say things mostly have returned to normal. But Peller Marion, of Mill Valley, Calif., an artist and writer who was attacked on Maui … END_OF_DOCUMENT_TOKEN_TO_BE_REPLACED