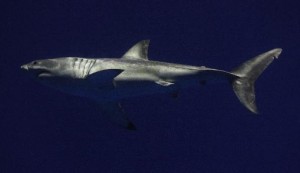 If you were planning to visit the new great white shark on display at Monterey Bay Aquarium, you have missed your opportunity.

The staff released the young female white shark today at 1:30, after only 11 days in captivity, because it had eaten only once during that time. She was delivered to the Santa Barbara Channel, tagged and released.

“These decisions are always governed by our concern for the health and well-being of these animals under our care,” Jon Hoech, director of husbandry for the aquarium, said in a news release. “On Saturday, it became clear that it was time to release her.”

It was the fourth white shark to have lived in the waterfront aquarium’s Outer Bay exhibit, and by far the quickest to have gained freedom. She measures 4½ feet and weighs 55 pounds.

Information about the aquarium’s white shark project and shark conservation initiatives, and an archived webcast interview with white shark experts, is available online.

Additionally, white shark researchers from the aquarium and Stanford University will be part of a white shark webcast Friday at noon. Visit the website to register.