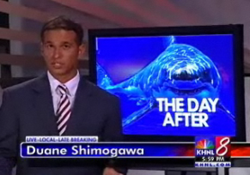 The day after a shark takes a bite out of a surfer and his board, warning signs continue to caution people to stay out of the water. Those signs are posted along the water at Kahana Bay in Kaaawa.

Officials say the victim, a man in his 40s, was surfing when the shark chomped down on his right leg. The surfer was taken to Queen’s Medical Center and was listed in serious condition. The shark took a large chunk out of his right thigh. He was also bitten on his ankle and fingers. (MB: Todd Murashige is recovering at Queens Medical Center.)

Kaihaku Chun lives right above where the attack happened. He also surfs in that area.

“We’re very near the water, we go in the water a lot, whether it be surfing, kayaking or snorkeling, but because of the history of the area, you’re always a little, for me anyways, cautious,” he said.

Lifeguards were busy Wednesday, making sure everyone stayed out of the water.

“We paddled out to a few people that were close to the shore today (Wednesday) and they came back as soon as we notified them and there’s been a few people that did not go in the water because they were unaware of what had happened,” City Ocean Safety and Lifeguard Services Lieutenant John Hoogsteden said.

Chun says Tuesday’s shark attack victim is lucky he made it out of the water alive.

“I’m not sure exactly what the distance is, but that’s a far paddle to paddle with a chunk out of your leg, or any bleeding, let alone be in top physical shape,” he said.

A shark expert says it’s still puzzling as to why sharks attack people.

“It’s a very rare event in Hawaii and we’ve got no clue why they switch from feeding most of the time on lobsters and turtles and fishes, and dead whales and things like that, why every once in a while one of them takes a swipe at a human being,” Shark expert, Dr. Kim Holland said.

Experts also say killing off sharks is not the answer.

A rare attack that causes waves of reactions. Lifeguards say they haven’t seen any signs of sharks in the area. No beaches are closed, but shark warning signs will remain up for at least for another day. About a year ago, another surfer was bitten on the foot near Kahana Bay. This is the second confirmed shark attack in Hawaii this year.