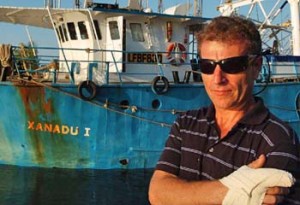 A fisherman has endured a bite from a shark he was trying to free from a net – then a 20-hour dash to medical help, only for the trawler he was on to run aground within “spitting distance” of shore.

The tendons in his right index finger had been ripped to the bone by a bronze whaler.

Mr Gorrell said the shark had been caught in a device that stops unwanted marine life getting into nets.

”We were wrestling it and trying to free it and it swung around and got me,” he said.

The attack happened on Monday, near Croker Island off the Territory coast.

Mr Gorrell, 43, said that when he saw Fisherman’s Wharf in Darwin yesterday morning he was “extremely happy”.

But then the unexpected happened – the boat got stuck on the seabed at an awkward angle, sparking fears it would roll.

“We got totally bogged and could feel we were starting to go over,” Mr Gorrell said.

“We couldn’t believe it – the wharf was seriously spitting distance away. It was a case of so close but so far.”

Mr Gorrell, who is from Melbourne will have surgery today.

While he was being treated in hospital the five other crew stuck it out on the stranded boat as they waited for the tide to come back in.

They finally refloated the Xanadu I yesterday afternoon.