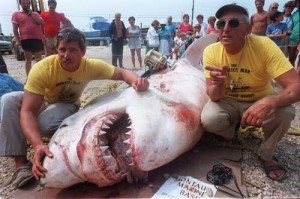 BY ROBERT WARGAS | Special to Newsday

Frank Mundus, the legendary Montauk shark fisherman on whom the crusty Captain Quint character from the movie “Jaws” was said to be based, died in Honolulu after returning there a week ago from a shark fishing trip off Long Island, his wife said Saturday. He was 82.

Jeanette Mundus, 46, in an interview from the couple’s home in Hawaii, said her husband died Wednesday in The Queen’s Medical Center in Honolulu from complications after a heart attack that occurred Sept. 6 just after he arrived at Kona Airport. After collapsing in the terminal, he was rushed to the hospital, where he later had another heart attack, she said.

“He wanted to be remembered as a pioneer in his sport,” she said. “He was upset about the overfishing of the waters by commercial vessels.”

At the end of his decades-long career as a sport fisherman, Mundus was increasingly concerned with fisheries conservation, his wife of two decades said.

“He was an extrovert, a straight shooter, he never held back,” she said. “But he had a soft side.”

The two had retired in 1991 to Hawaii, where they tended a 20-acre farm that had a orange grove and was populated with animals including sheep, two dogs and a pet pig.

Mundus had a history of heart problems and had quadruple bypass surgery in 1998, his wife said.

In Montauk, where Mundus had returned to fish every summer, fisherman Rick Freeda of East Quogue said Friday that Jeanette Mundus called him with the news and that he spread the word to the fishing community.

Rob Salvesen of Montauk, captain of the fishing boat “Hang Em High” and an acquaintance of Mundus for 30 years, was with Mundus during his final shark fishing trip two weeks ago.

“He was a blast, and we went joke for joke,” he said Friday. “He was a happy man and the happiest I ever saw him.”

Salvesen said he took numerous pictures of Mundus, the man many believe “really made shark fishing what it really is,” Salvesen said. “I was thinking, ‘This may never happen again.'”

“He legitimately had that world record for rod and reel,” Salvesen said.

Mundus’ Web site said he was booking tag-and-release shark fishing trips on his boat the Cricket II at $2,000 for a party of five from Aug. 17 through Sept. 5. “I will ride along to aggravate,” he wrote.

The idea for “Jaws,” the best-selling book by Peter Benchley and later the 1975 film, was developed years earlier.

Around 1968, Benchley, who was in Montauk, became fascinated by Mundus, who would head out to sea in a 40-foot fishing boat searching for giant killer sharks that were virtually as big as the boat. He would harpoon them, run with them until they tired, then bring them alongside and shoot them until they were dead.

The fearless and irascible character of Quint was said to have been modeled after Mundus. But Benchley, before his death, said that was not the case, and that Quint was a composite character.

Rick Freeda, of East Quogue, another fisherman who knew him well, said Friday, “The movie was based 100 percent on him. Everything that they talked about in that move came directly from him.”

But on his Web site, Mundus had a few professional criticisms of the movie. “It was the funniest and the stupidest movie I’ve ever seen . . . no shark can pull a boat backwards at a fast speed with a light line and stern cleats that are only held in there by two bolts,” he said. “And I’ve never boiled shark jaws. If you do, you’ll only end up with a bunch of teeth at the bottom of your bucket because the jaw cartilage melts.”

But Mundus was less critical of the Quint character. “He knew how to handle people the same way I did,” he said.

John Aceri, another Montauk fisherman who knew him well, said Friday, “If they don’t build a monument for him in Montauk, it would be a shame. He put it on the map.”