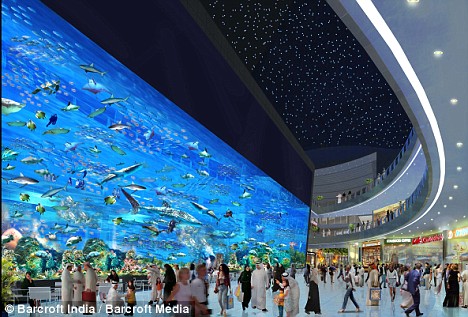 Shark fights in one of the world’s biggest aquariums are threatening the opening celebrations of Dubai’s flagship new mall. Over ten per cent of the sharks in Dubai Aquarium’s 10 million-liter tank have been killed in attacks that have marred the build-up to its grand opening on October 30.

Sand Tiger sharks have killed at least 40 smaller reef sharks and been aggressive towards divers working on final preparations in the giant tank. The aquarium features the world’s single largest school of sharks and the world’s largest viewing platform. It is the centerpiece of the new 5.9 million sq ft Burj Dubai Mall.

Built to showcase one of the world’s most diverse and exotic collections of marine animals, the aquarium is home to more than 33,000 living specimens. A total of 85 species is represented, with over 400 sharks and rays considered the main attraction.

But the concentration of such a large number of sharks in a small space has led to what some might have considered predictable problems for the Dubai Mall’s management.

General manager Yousuf Al Ali admitted the world’s most feared ocean predator had caused teething problems. “It is inevitable that aquatic species die – sometimes out of natural causes or out of injuries inflicted by bigger fish species,” he said.

“Sand Tiger sharks, by nature, are fish-eating. However, all sharks and other animals in the Dubai Aquarium & Discovery Centre at The Dubai Mall are currently on a monitored feeding schedule in order to subdue their naturally opportunistic behaviour and appetite.”

Divers carrying out tasks in the tank have also been attacked by the naturally aggressive sharks.

Several have had their equipment damaged and experienced minor injuries due to the behaviour of the sharks, according to UAE daily Khaleej Times.

Mr Ali said: “During the stages of setting up the aquarium, two cases of minor injuries were reported and were immediately attended to by the on-site medical team.”

The aquarium features a 270-degree acrylic walk-through tunnel designed to give shoppers close encounters with some of the most diverse marine life on the planet.

Hopefully they will not be witnessing the world’s greatest shark fight.