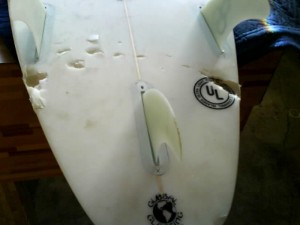 Our breaking news report on a Surf Beach shark attack has been quite the saga at The Fear Beneath; the original details we published from a misleading email were called into question, and a series of follow-up communications resulted in what we now believe to be the truth of the matter.

The story has now been picked up and covered by KSBY 6 Action News, MSNBC, Vandenberg Base news, The Santa Maria Times, The Shark Research Committee, Surf There Now, Swim At Your Own Risk, and a number of other shark industry sites.

We’d like to put an end to this matter in the best interests of all parties involved, and because I think everyone agrees the issue has been thoroughly exhausted. What follows is the official report from none other than Kyle (Last Name Withheld) (shark attack victim) himself:

I was surfing alone and a pod of dolphins cruzed thru and about a minute later I was hit from the back (tail of board) and lifted out of the water. I looked eye to eye with this shark as it passed me with my board in it’s mouth, as it thrashed around I assume to spit my board out it’s tail hit me and basically disappeared.

Call me a pussy but I’ve never been so scared in my life. That is the third shark I’ve seen there and second in the last month.

The Fear Beneath would like to thank Kyle for stepping forward and clarifying the matter (we’re all glad he is alright;) as our newsroom strives for fairness and objectivity, The Fear Beneath hopes that we’ve reported the story to the satisfaction of our readers and the involved parties.