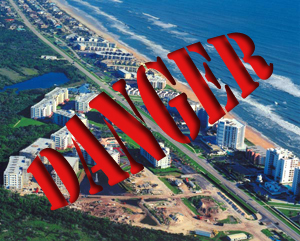 Everyone is reporting the same AP-style blurb, so here goes:

In Volusia County, a tourist from Tennessee has become the 22nd shark bite victim of 2008 — tying the previous county record set in 2001.

The Volusia Beach patrol says it looked like a 2- or 3-foot juvenile shark bit the unidentified man, 32, Sunday just before noon.

The man was swimming in waist deep water off Ocean Shore Boulevard in Ormond-by-the-Sea. The bite just cut the skin.

The majority of the shark bites this year in Volusia County have happened south of the New Smyrna Beach jetty.