Mark Lane asks the same questions we’ve been asking for weeks here at The Fear Beneath; with a record-tying 22 shark attacks in Volusia County this year, where is the media? Have they suspended their coverage of shark attacks as a public safety issue? When Volusia County sets the record for shark attacks in a single year, will the news media finally wake up? Mark points out that this should be a selling point for tourism, not a detractor from it. 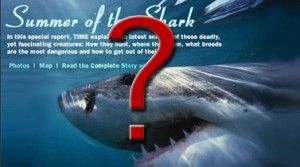 Volusia County has been on the verge of beating its all-time shark-attack record for a couple weeks now. So where’s CNN? Where’s Time magazine?

In 2001, our record 22 shark bites gained us a prominent place in a Time cover story with the scary headline, “Summer of the Shark.” Foreign news crews arrived in New Smyrna Beach and shoved microphones in front of surfers. From the kind of coverage we got, viewers got the impression that gangs of sharks were cruising the streets in cars looking for victims.

Nobody cares. We’ve matched the 22 unprovoked shark bites from 2001 and are just one unlucky surfer away from the all-time record. So where’s our close-up? Where are the vendors with “Shark Bite Capital of the World” T-shirts?

A sad state of affairs.

Every time I write about living in the Shark Bite Capital of World, I feel it’s necessary to make two points.

You say this, however, and you sound like the frightened town officials in “Jaws” downplaying the danger. (“Larry, the summer is over. You’re the mayor of Shark City.”) But really: Nobody here has been killed by a shark in modern memory.

(2) Talking about the Man-Stalkers of the Deep does not hurt tourism. Florida thrives on thrill-seeking tourists. People who want to brag about braving sharks, alligators, hurricanes, lightning and an unpredictable citizenry. This is no mixed-drink-with-a-paper-umbrella-by-the-pool kind of place, and they know it. They buy “Shark Capital” T-shirts and ask you to take pictures of them next to the alligator warning signs.

Bloodthirsty marine life is not a drawback; it’s a selling point.