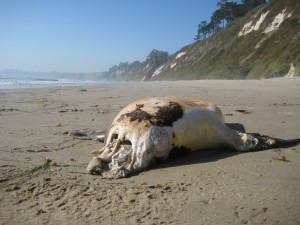 This mangled, headless, corpse, washed up on the beach in Santa Barbara.

A faithful Fear Beneath reader from our home town of Santa Barbara, CA, sent in this gruesome picture of a decapitated pinniped after walking in to the mostly-exclusive private beach of Hope Ranch.

The rotting, fur-less, carcass showed signs of predation by scavengers, as it had been disemboweled and was spilling its intestines out onto the beach, in addition to having its head removed by an unknown assailant.

These types of occurrences are frequent on Santa Barbara County beaches, and while we are unable to definitively ascribe this attack to Carcharodon carcharias, head-less seal bodies always make us wonder…

What fear lurks beneath the surface in *your* local waters?