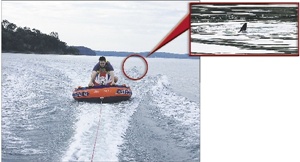 The picture above shows what is most likely a hammerhead shark fin in Lake Macquarie, Australia

A shark attack claim that a teenager made this weekend was dismissed yesterday as a hoax, but pictures taken off Wangi Wangi reaffirmed that sharks do exist in Lake Macquarie.

James McAllister and friends photographed a shark off Wangi Wangi on Saturday morning. Mr McAllister said he was water-skiing with friends when the one- to two-meter shark emerged.

“I just pulled my fiancee out of the water when it emerged about five meters from the front of the boat and started circling,” Mr McAllister said. “After we calmed our nerves, we kept biscuiting and it popped up again later.”

Mr McAllister said the sighting would not deter him from water-skiing. Mr McAllister believed the shark was a blacktip whaler but NSW Fisheries officer Warren Winter said it was probably a hammerhead.

“Blacktip sharks are not known to inhabit our waters,” Mr Winter said. “My bet is the shark is a hammerhead shark. I’m in the lake for 10 hours a day and I’ve only ever seen hammerheads.” He said shark attacks in the lake were “very rare”.

Police had not decided yesterday how to deal with a teenager who fabricated a story about being attacked by a shark in Lake Macquarie on Sunday.

The boy, aged 15, told police that a four-metre shark had bitten a chunk out of his surfboard off Wangi Wangi. Police initially believed the story until receiving information that it was a hoax.