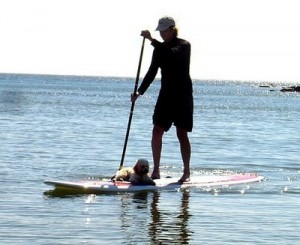 The recent influx of clueless kooks standing up on small cruise-liners in many local lineups is part of the awful agony of the new stand-up paddle surfing trend, the pain felt especially bad in Southern California.

This article, published a couple months ago (yeah, we’re lazy) over at MyLocalLineup.Com seems to issue a warning; stand-up paddle surfers represent a delicious new source of victims for the great white shark, also known as … The Fear Beneath.

‘Stand-up paddle (SUP) surfers reported above average shark sightings in January and February at San Onofre State Beach, according to the Shark Research Committee, a non-profit scientific research organization that documents shark attacks in the Pacific Coast of North America.

In these two months alone, there have been five reported incidents, where sharks subtly approached SUP surfers and then swam away without any signs of aggression. Most of the reports describe a 16-17 foot great white, located south of the power plant and about 30-50 yards offshore …

The unusual number of sightings by SUP riders could be due to either one or a combination of the following factors … the ability to reach remote areas leads them to places where white sharks are more likely to be … the larger surfboard area, together perhaps with the paddle strokes, is more attractive to great whites. Whatever the case may be, this new surf modality is receiving scrutiny even from the locals’ local, namely, great whites.’