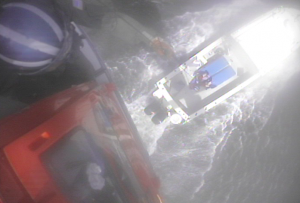 A Jackson man was bitten by a shark Saturday while fishing about 65 miles southeast of New Orleans, the Coast Guard reported. The man, identified only as 56 years old, was fishing aboard a vessel named Predator near Breton Island. Coast Guard Station Venice received a radio call for medical help from the Predator around 10 a.m. and contacted Coast Guard Air Station New Orleans.

Coast Guard video of the medevac showed personnel from an MH-65C rescue helicopter lowering a rescue swimmer to the boat. The victim was conscious. The video showed his foot and a portion of his leg had been wrapped before he was lifted to the helicopter. A Coast Guard spokesman said the helicopter reached Air Station New Orleans around 11:40 a.m. and the man was taken by ambulance to a hospital. His condition wasn’t available Saturday.