A Central Coast man is in the hospital after being attacked by a shark at Avoca Beach earlier today. The man was bitten by the shark while swimming with his granddaughter close to the shore of the patrolled surf beach.

The Copacabana resident fought off the shark by kicking his leg in and out of the water. He was taken to Gosford Hospital with deep cuts to his lower leg.

The beach was closed while lifeguards and the Westpac Rescue Helicopter searched the water, but there was no sign of the shark. 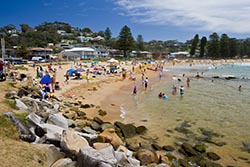