The infamous Gaviota Great White Shark has struck again! Kayaker Duane Strosaker posted a fantastic report of an attack he endured on August 2nd – while kayaking off the coast in the always-sharky waters of Northern Santa Barbara County.

“Without warning at about 12:40PM, when I was around 5 nautical miles from Gaviota State Beach, a great white shark, which I estimated to be at least 15 feet long, bit and held onto my kayak. It attacked from my left side, with its head coming up from the water only a few feet from my kayak. There was not a hard impact. It bit my kayak where my left foot was located inside the hull, and its mouth wrapped half way around the hull. My left foot was actually inside the jaws of the shark but protected by the kayak.

The shark held onto my kayak for 10-15 seconds, during which it seemed relaxed and was not moving. Its head was huge, and I remember seeing its eye and a hole on the side of its head, as well as its gray skin. I put the left tip of my paddle against the shark’s head, and I thought about hitting the shark, but I didn’t want to anger it or make it thrash. The whole time the shark was latched onto the kayak with my foot inside, I was screaming like a little girl.”

Truly an amazing tale, and a reminder to steer clear of the natural habitat of these voracious predators! There seems to be a fifteen-foot-plus local Great White Shark off the Gaviota Coast…. Holy Shit! 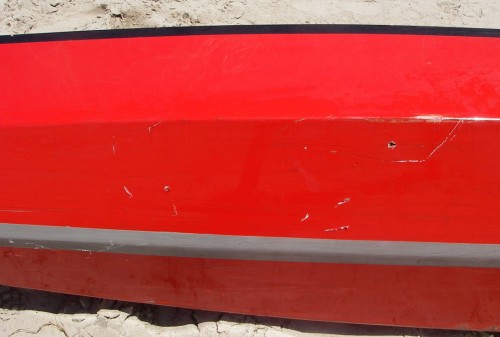