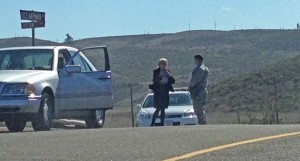 Santa Barbara news sources are reporting that a shark attack has claimed a life at Surf Beach in Northern Santa Barbara County. Barely two years ago, Lucas Ransom was killed when a great white shark bit off the majority of his leg in a tragic incident.

Noozhawk reports: “A 38-year-old man was fatally injured Tuesday when he was attacked by a shark while surfing at Surf Beach near Vandenberg Air Force Base west of Lompoc, according to the Santa Barbara County Sheriff’s Department.

The incident, reported shortly before 11 a.m. by another surfer who was in the area, occurred some 500 yards north of Surf Beach, said sheriff’s Sgt. Mark Williams.

“A friend, who was also surfing and witnessed the shark attack, swam over to assist the victim, pulling him out of the ocean and onto the beach,” Williams said. “The victim’s friend started first-aid procedures while another surfer called 911.

Vandenberg Fire Department personnel were the first to reach the scene, and took over the first-aid efforts, Williams said, but the victim eventually was declared dead by paramedics.”