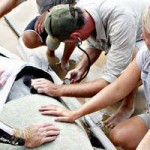 A false killer whale that beached on the Sunshine Coast yesterday bore wounds thought to be from a shark attack, experts have said. The whale died after desperate efforts by up to 50 people who rushed to Twin Waters on a rescue mission. The 3.8 metre female was first spotted at 6:30AM south of Mudjimba Island. Originally thought to be a pilot whale, it was later … END_OF_DOCUMENT_TOKEN_TO_BE_REPLACED