A false killer whale that beached on the Sunshine Coast yesterday bore wounds thought to be from a shark attack, experts have said.

The whale died after desperate efforts by up to 50 people who rushed to Twin Waters on a rescue mission. The 3.8 metre female was first spotted at 6:30AM south of Mudjimba Island.

Originally thought to be a pilot whale, it was later identified by an attending Australia Zoo rescue team as a “pseudorca crassidens” – a false killer whale. 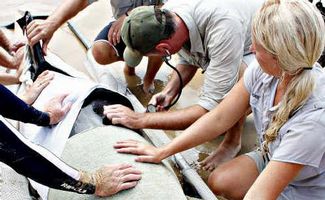 The rescue team brought the whale into the shallows to conduct the identification, and efforts then continued to save the distressed mammal, which was believed to be an adult.

The injured whale had a damaged dorsal fin and evidence of “superficial” shark bites.

The rescue efforts stretched well into the morning as volunteers and veterinarians fought to keep the stranded mammal alive.

A rescue unit spokeswoman said staff and volunteers were able to move the large whale from the beach and transfer it to a truck for transport to the Australian Wildlife Hospital at Beerwah.

Those involved in the rescue were said to be devastated over the death of the whale.

Sources said sightings of the extremely sociable false killer whales are not common on the Coast. They prefer deeper waters away from land.