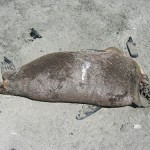 The Shark Research Committee has posted the following account of a pinniped casualty near Topaz Jetty in Redondo Beach. REDONDO BEACH On August 27, 2008 Cory Kupke was surfing at the Topaz Jetty in Redondo Beach. It was 2:25 PM and he had been in the water about one hour. He had surfed earlier in the day prior to work but returned to the beach about 1:30 PM. The ocean had … END_OF_DOCUMENT_TOKEN_TO_BE_REPLACED 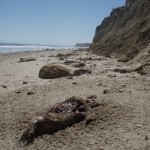 This gruesome photograph was taken in the area of the Bixby Ranch, close to Point Conception in Northern Santa Barbara County! The Santa Barbara Channel has become increasingly notorious for its large pinniped population and the associated Great White Sharks that hunt them. … END_OF_DOCUMENT_TOKEN_TO_BE_REPLACED