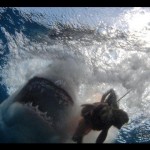 Bloomberg is running the following article - it's a somewhat entertaining read. MB By Malcolm Scott, Bloomberg News In December 1963, a great white shark tore open Rodney Fox's abdomen, broke half his ribs, punctured his diaphragm and lung, and exposed the main artery to his heart. He's devoted his life to diving with sharks ever since. Fox returned to the water a year … END_OF_DOCUMENT_TOKEN_TO_BE_REPLACED

How is this newsworthy, you ask? It's not. At all. -MB Contact Music wants you to know: Actress Shannon Doherty is terrified of returning to the sea after a shark attack. The former Beverly Hills, 90210 star went cage diving off the coast of Hawaii two years ago and "freaked out" when the sharks she hoped to see underwater appeared. She tells Details magazine, "I … END_OF_DOCUMENT_TOKEN_TO_BE_REPLACED