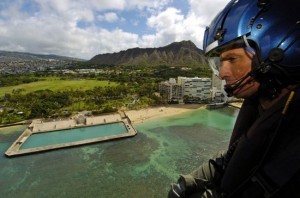 We’re lagging behind a few days here, so this article’s not as fresh as our usual catch. Thanks for your patience and all the letters of support we’ve been receiving from dedicated Fear Beneath readers. We always appreciate your feedback!

The chopper crew was keeping an eye on both.

“You see a situation like that develop, and you’ve got to think, what is the best thing to do?” said Lt. Cmdr. Tyson Weinert, 34, who was piloting the Coast Guard’s familiar orange-and-white-striped HH-65 Dolphin that day.

The crew couldn’t get the man’s attention, and Weinert said he was ready to lower a rescue basket and put a swimmer in the water if the shark got any closer.

“Just the fact that we were orbiting over the shark might have caused it go in another direction,” said Weinert, who’s from San Diego. “It’s just one of those things. You never know what you’ll see on a patrol.”

That patrol is one that the Coast Guard conducts almost daily. It has done so since shortly after the Sept. 11, 2001, terrorist attacks.

The “ports, waterways and coastal security” mission has become a staple of the Coast Guard nationwide. On O’ahu, the low-flying, shore-hugging Dolphins are a familiar sight and sound to kama’aina and tourists alike — even if they may not really be sure what the Coast Guard is doing.

“I was thinking, what it was, because it doesn’t have the writing of the police, or the color of the police,” said Anna Landau, a visitor from Italy who was at Waikiki Beach recently and had seen the orange helicopters fly by.

Marilyn Dutra, 56, from California, who spends several months a year here, said the distinctive high-pitched whine of the Dolphin is enough for her to know what’s coming.

“We’ll be walking and hear it, and you’ll know it’s them,” said Dutra, who has friends who run the Prime Time Sports concession in Waikiki. “I’m assuming that (coastal protection) is what they are doing.”

Recently, a Coast Guard crew of three demonstrated what they do, flying slowly around O’ahu at around 80 knots and as low as about 200 feet on a nearly two-hour circuit.

With 1,500 pounds of fuel, the twin-engined Dolphin can fly for about 2.5 hours. Normally, two pilots, a rescue swimmer and flight mechanic are on board. To a lesser extent, the Coast Guard also flies Neighbor Island coast security patrols.

The missions are one outgrowth of 9/11 and homeland security concerns. Another was the addition in 2004 of armed Coast Guard Maritime Safety and Security Teams operating from small boats and intended to be a fast-response measure.

For fiscal 2007, the Coast Guard flew 360 flight hours on the coast security missions in Hawai’i — a fraction of the 5,780 hours flown by the helicopters on all missions, which typically include about 350 search-and-rescue flights a year.

But the coastline flights remain the most visible and familiar aspect of the service’s duties.

For more on this story, see tomorrow’s edition of The Advertiser.