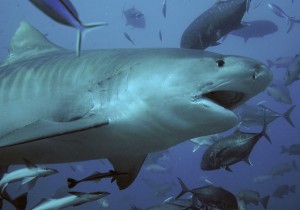 Two female tiger sharks now rule the waters of Shark Reef Aquarium at Mandalay Bay. The only tiger sharks available for viewing in the U.S., these exciting new additions can be identified by their distinct tiger-striped markings in the 1.6-million-gallon aquarium.

“We are delighted to unveil these powerful predators to our guests of Shark Reef Aquarium,” said Adrienne Rowland, the facility’s director. “The tiger sharks demonstrate Shark Reef’s goal to raise awareness and appreciation of our world’s fascinating marine life.”

Attributing to the tiger sharks’ impressive reputation are their sharp, serrated teeth, powerful jaw and insatiable, non-discriminating appetite. These sharks have been known to consume unusual items such as license plates, tires, baseballs and other debris – earning them the moniker “garbage cans of the sea.”

Currently, Shark Reef’s two tiger sharks are more than six feet in length, and the species can reach up to 14 feet in length. The scavengers lurk in shallow, coastal waters in tropical and temperate regions such as Hawaii and Australia.

The tiger sharks join an impressive group of animals at Shark Reef Aquarium, a 90,560-square-foot, predator-based aquarium – the only one of its kind in North America.

Since its debut in 2000, Shark Reef Aquarium has become a must-see Las Vegas attraction and educational facility, where adults and children alike can enjoy and learn about more than 2,000 divinely dangerous animals including a rare Komodo dragon, a giant Pacific octopus, sharks, crocodiles and piranhas.

Shark Reef Aquarium at Mandalay Bay is open daily from 10 a.m. to 8 p.m., Sunday – Thursday; and 10 a.m. to 10 p.m., Friday and Saturday. Ticket prices are $16.95 for adults and $10.95 for children; children four and under are free. Discounts are available for Nevada residents with valid ID.