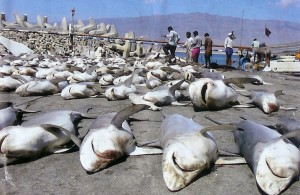 Wholesale massacre of sharks. When will it stop?

AmericanChronicle.com, discussing the pirate crisis off the shores of Somalia, writes about the atrocities being committed against the marine life in coastal Somalia. Here’s an excerpt from the rather long article:

“Some Somali shores became uninhabitable because some of the ships were throwing thousands of Shark carcasses into the sea after their valuable fins had been cut off. The mutilated dead bodies of these majestic sharks were coming into shore and decayed on the village beaches.

The smell was terrible and many residents were getting sick due to infections carried by flies from the rotting carcasses. The residents of the coastal towns such as Garacad, Jariiban, Idaan etc. suffered severely. An entire shore line could look like red for entire days; this was not blood but floating lobster-eggs shaven from the processing of Lobster tails for the rich clients mainly in Kenya and Dubai.

This indiscriminate lobster harvesting during wrong times, when the female Lobsters carry eggs and the forbidden taking of female lobsters with eggs caused the villagers to go hungry because the marine creatures were depleted by these ruthless commercial fishing practices neglecting any laws of legal fishing or cultural habits.”