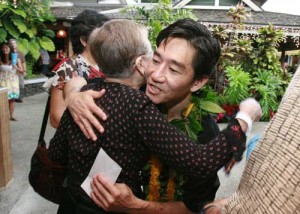 Todd Murashige hugs it out at his December 3 fundraiser

We covered the shark attack on Todd Murashige at Crouching Lion on Oahu earlier this year.

Todd Murashige has lost his tan and shoulder-length hair. All his toes move, he’s standing on his two legs and can bend his knees to a 130-degree angle.

But the biggest changes in the 40-year-old Ahuimanu man since a shark chomped his right leg are the ones you can’t see.

“Oh, we can see the change for the better,” said his aunt Wilma Yonemoto. “Unfortunately, it had to be that way. He’s much more patient, pays attention to his family more. He doesn’t take things for granted now. He matured overnight.”

In Murashige’s life, surfing used to come above all else – “I hate to say it, even his family,” said Richard Peralta, his friend since high school. “We called him the samurai because he was stubborn and bullheaded. … His eyes are more wide open now, and he sees life in a bigger way.”

Peralta performed in three bands at a fundraiser last night to help support his friend, who has been unable to work as a tile-setter since he was attacked while surfing Sept. 9. About 250 to 300 friends, family members and strangers bought $45 tickets at the Willows restaurant in McCully to support and celebrate with Murashige and his wife and two children.

Murashige, a competitive surfer, was sitting on his board near the Crouching Lion Inn when he was bitten by what he thinks was a 12-foot tiger shark. He managed to paddle the half-mile back to shore, where he was assisted by a stranger.

Though he lost a lot of blood, no major artery was severed.

“I feel so blessed to have a second chance in life,” Murashige said. “No words can express how grateful my family and I are.”

Murashige said the shark attack was “the perfect scenario for me. If I got banged by a car or hurt working, I wouldn’t have gotten the message.”

“Before it was like SURF, myself, self-indulgence, not my family,” he said.

But he said it was something about being “basically alone in the ocean” that helped him get it and hear the “wake-up call.”

“It’s a total transformation for him,” said his wife, Heather. “He’s been touched with something beyond what we can understand. He’s embraced it.”

Even their relationship has improved, with more meaningful conversations and quality time.

“It’s not all about the surfing,” she said.

She said she sometimes asks, “Whoa, is this really you?”

Surfer Bethany Hamilton, now 18, said her whole life has changed for the better after the shark attack at age 13 that cost her an arm, and senses Murashige has experienced that, too.

“I can just see it in his smile and the way he talks,” she said. “He’s so confident and he’s stoked.”