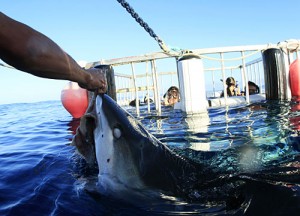 In what seems like the opposite of common sense, The Honolulu Star Bulletin is reporting on scientists who state that there is apparently no correlation between shark cage-diving tours and an increased risk for being attacked by a shark.

Check out the full story for all the details:

Such shark tours pose no significant threat to near-shore ocean recreation users, and there is no reason to believe they will as long as they remain “spatially separated from recreational ocean users,” Meyer said in response to a question on whether the data might shift if there is an increase in the number of tour operators on the South Shore.

Meyer noted other studies that show a greater number of attacks were in connection with shark tours that involved an operation with underwater divers who sit on the reef and attract sharks with fish parts versus cage-diving tours.