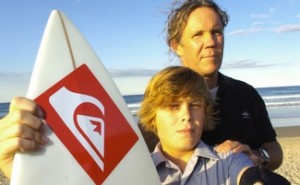 A teenage surfer has escaped with superficial cuts and a ripped wetsuit after being knocked from his board by a shark on the New South Wales north coast.

The boy, named in media reports as 14-year-old local Zac Skyring, was out for an early surf off Broken Head, just south of Byron Bay, when he was knocked off his board just after 6am (AEST) today.

He was reportedly thrown into the air by the impact of the shark, which punctured his wetsuit, but later went to school.

He says the boy and his father paddled back out to warn him other surfers of the danger.

“His dad had the idea – he wanted to get him back in the water. Otherwise he reckoned … he’d never get him in the water again,” he said.

Tony Lewis, manager of the Broken Head Holiday Park, said his staff had told him about the incident.

“All we really know is that some kid was knocked off his board and he got a bit of grazing,” he said.
“It was no big deal, just a little mark on his board and a little graze on his body was apparently all that he got.

“My groundsman here is a surfer and he says it happens all the time, so they weren’t even concerned.”

The shark was believed to be a one-and-a-half-metre bronze whaler, according to the ABC.