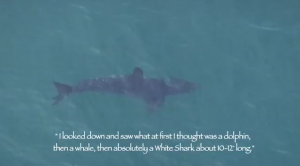 From Surfline, video courtesy of Oglevision.com.

Thursday, July 23rd saw the beginnings of a pumping south swell — and a white shark spotted about 300 yards off Malibu. This is on the heels of many sightings at both San O and Sunset Beach in LA.

Says shark expert Ralph Collier: “Although it would appear that there is an increase in the number of shark encounters, this could be an artifact of simply more individuals reporting observations and not necessarily an increase in the shark/ocean user populations. However, there appears to be an increase in the number of events at specific locations, Sunset and San Onofre State Beaches, and possibly the same individual sharks being involved in these events at these sites. We could have juvenile and/or sub-adult White Sharks utilizing specific sites for feeding as these incidents appear to increase during Grunion spawns.”

UPDATE: Apparently there was some controversy at the local news station over whether it was a Mako or a Great White Shark.