John Sojoski will think twice when stepping on a “rock” from now on, after being bitten by a shark on Boxing Day.

Mr. Sojoski, 55, of Copacabana, was teaching his visiting granddaughter Summer, 12, to surf at Avoca Beach, when he struck trouble about 11am on Saturday. “I stepped on it originally,” Mr Sojoski said.

“But then when I stepped off it, it latched on straight away and it was the weirdest sensation. It was like a vice squeezing and squeezing. Then it started shaking my leg and moving it off the ground.” 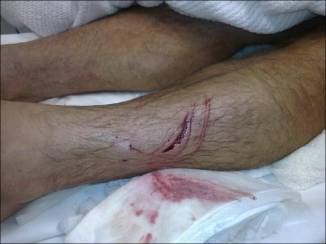 John Sojoski of Copacabana was bitten by a shark while surfing at Avoca Beach.

Mr Sojoski managed to kick the shark away and still send Summer in on a wave, without telling her what had happened. “She didn’t know until we got back to the clubhouse,” he said. “I figured if I freaked her out, she might fall off the board.”

Water and air patrols were unable to locate the shark, with the beach reopened mid-afternoon on Saturday.

Mr Sojoski, a surf board manufacturer, counted 36 punctures in his lower left leg and was told to stay away from the water for 13 days. But as soon as he gets the all-clear, he’ll be back.

“I’ve surfed for 30 years and haven’t seen a shark – I didn’t even see this one,” he said. “But the water is the sharks’ domain and we have to respect that.”

The incident hasn’t dampened Summer’s enthusiasm for the water, with Mr Sojoski’s girlfriend Amanda her likely replacement “surf coach” for the rest of her holiday. 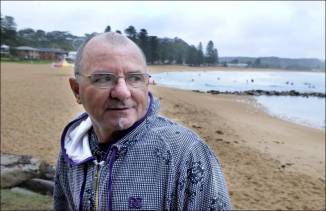 Mr Sojoski couldn’t praise enough the actions of the people who helped him, thanking surf lifesavers, ambulance officers and Gosford Hospital staff – who he said were “so understaffed but still managed to have smiles on their faces”.