A young lifeguard disappeared in a “pool of blood” in the fourth shark attack at a South African beach in two years. Witnesses said the 22-year-old waved his hands frantically in the air before being dragged under by a shark after paddling on a surf board off the coast of Port St Johns in the Eastern Cape.

John Costello at the National Sea Rescue Institute (NSRI ) said the board later washed up on the shore but there were no signs of the unnamed lifeguard. He said: “The witness said before he disappeared he threw his hands up in the air and was pulled down and a pool of blood was left.”

The weekend attack was the second this year and the fourth in the past two years at the beach which is popular with South Africans and tourists. In January off-duty lifeguard Sikhanyiso Bangilizwe, 26, was attacked and killed by a bull shark which hunts in shallow waters and can be aggressive. Mr Costello added: “People are constantly being warned not to swim in murky waters, but they continue to put their lives in danger by not behaving responsibly.”

Lifeguard Abongile Maza, who was paddling a few metres behind the victim, said the attack had been sudden and vicious, adding that the water turned blood red. He said: “I could not believe what I saw with my own eyes, because it did not seem real.”

Coastguard chief Khaya Mjo said: “He was riding the waves on his knee board with another lifeguard who was riding from a distance. The other lifeguard said he only heard him scream, then he saw him raise a hand and there was only blood.”

The shark could not be identified because it was impossible to make an analysis without seeing the bite marks. 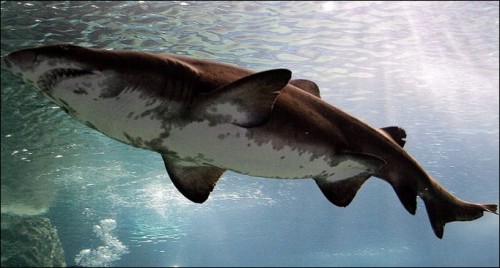 The NSRI said police were investigating the disappearance but no body parts had yet been found.