Michelle Adamson swam within three metres of a tiger shark and lived to tell the tale. The Telina resident encountered the deadly animal while snorkelling with husband Mark off Heron Island at the weekend.

The shark did not attack her, and Ms Adamson said she only became aware of how close she was to the shark once she was out of the water. “There were people yelling at us to get out of the water, and I couldn’t hear because my head was under,” she said.

“But when I stuck my head up, people were yelling and screaming ‘Shark! Get out of the water’, so I got out of the water and up on the jetty I saw it just on the other side to where I was snorkelling. “It was probably about three metres long.”

Mrs Adamson said she had been looking down while snorkelling, so did not see the aquatic predator just metres away. “When you snorkel, you look down, not out in front of you,” she said. “But when I heard everyone yelling, I just swam, I didn’t look back.”

Tiger sharks are considered man-eaters, second only to the great white shark in the number of times they have attacked humans.

Mrs Adamson was thankful she had not seen the shark until she was out of the water. “It was scary enough as it was,” she said. “I don’t know what I would have done If I’d seen it in the water there with me.” 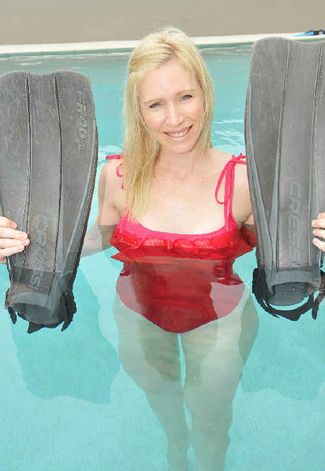 A spokesman from the Department of Primary Industries told The Observer there were numerous shark sightings across the state at the weekend.

He said swimmers or snorkellers should leave the water immediately if a shark was sighted, not swim at night, in murky waters, alone or when bleeding. People should also avoid swimming near mouths of estuaries, artificial canals or lakes.

As for Mrs Adamson, she said it may be a while before she gets back in the water at all. “My husband went snorkelling again, but I didn’t go back in the water,” she said. “I was a bit wary. I might go back with a group of people, but never by myself.”

Mr Pengelly was bitten on the arm, receiving deep cuts to his wrist and forearm. He is currently undergoing 12 weeks of physiotherapy.