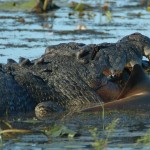 In the heavyweight championship bout of the animal kingdom, a giant crocodile defeated a shark in a TKO - and then enjoyed a victory seafood dinner. Two boats full of tourists got the photo opportunity of a lifetime after the 16-foot crocodile's decisive win on a river in Australia's Kakadu National Park Saturday morning, the country's Northern Territory News … END_OF_DOCUMENT_TOKEN_TO_BE_REPLACED