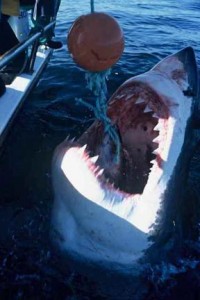 A couple of Northern Santa Barbara County fishermen have reportedly encountered a “big, mean, fish” in the waters east of Point Conception. The female white shark, believed to be approximately 6 meters in length, is said to have approached their fishing boat several times and displayed unusually aggressive behavior.

Late spring and early summer are a notorious time of the year for shark activity, due to the breeding season for white sharks and their historical feeding patterns.

Scientists have, as of this moment, been unable to definitively connect this encounter with the rash of recent sightings in Northern Santa Barbara County.

The Shark Alert System and Threat Advisories contain actionable information about an incident involving, or a threat targeting, recreational users of the Santa Barbara County coastline.