In a grisly turn of events, the savage sharks of Western Australia have claimed yet another victim, as 2012 shapes up to be one of the most fatal years on record. The Herald has coverage of the event:

The 4m killer dubbed Brutus by surfers near Wedge Island, 180km north of Perth mauled a 24-year-old man as he surfed with a mate at 9am yesterday.

The victim, whose identity is yet to be released, was surfing about 200 metres off an isolated beach, the WA Department of Fisheries said.

A search to find the victim’s remains will also continue. Police were yet to speak with the victim’s family last night.

Fisheries Minister Norman Moore ordered a shark hunt to capture and kill the beast, saying of the unprecedented spate of attacks: “We seriously have got a problem.” 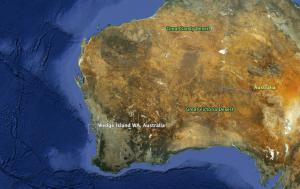 The jet-ski rider who tried to retrieve the surfer said it was a “massive, massive white shark” and “there was blood everywhere”.

The shark tried to knock Matt Holmes, 22, off his jet ski as he attempted to pull the man on to the back of the craft. Then the beast returned to take the lifeless body for a second time.

“By the time I got out there half of him had been taken and the shark was circling,” Mr Holmes said…