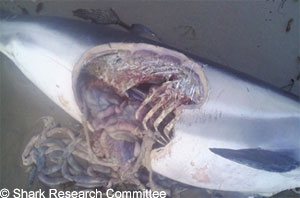 The Shark Research Committee covers what appears to be a large shark attack on a dolphin in Santa Barbara waters.

“Hope Ranch — On February 8, 2009, Harry (last name withheld) found a dolphin carcass washed up on the beach at Hope Ranch in Santa Barbara County. The animal appeared to be a young adult. He estimated the bite at 14 – 15 inches in diameter. The wound appears to have been inflicted by a large shark, based on the size and observed tooth insertion points along the injury edge.”