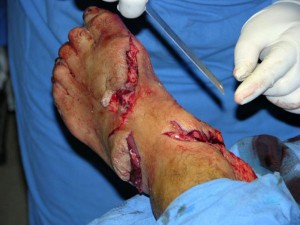 A shark bit Julia Anne Mittleberg, 26, of Morton, Ill., about 3 p.m. while she was in 3 to 4 feet of water in the Atlantic Ocean near the 400 block of Ocean Boulevard West, Holden Beach police said.

Mittleberg told emergency responders that she felt something bite her left foot when she was in the water. She was taken to the Brunswick County Community Hospital in Supply.

Police said a spokesperson from the hospital confirmed that Mittleberg is in good condition.

Shark attacks are not common and the most recent attack in the area in 2007 occurred at North Topsail Beach when a 14-year-old boy sustained minor injuries from a shark bite.

“We regret that this unfortunate incident occurred in Holden Beach, but consider it an isolated, chance occurrence.” a press release from the Holden Beach Police Department said.