Novice spear-fisherman Dean Brougham had just got into the water off the coast of South Australia on November 9, 2009 - when he felt something tugging at his leg. At first the 24-year-old gardener thought it was one of his mates having a laugh as they enjoyed a dip in the ocean under the warm Spring sunshine. But when Mr Brougham turned around he saw what every ocean dweller … END_OF_DOCUMENT_TOKEN_TO_BE_REPLACED 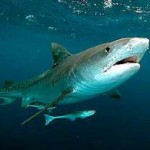 Monster catch: 4.1m (13 foot) tiger shark among state's biggest shark net catches... The Queensland State Government yesterday released its annual shark count data, revealing more than 500 specimens had been caught since the start of the year and warning beachgoers to be careful in the water. A 4.1-metre (13 foot) tiger shark was the largest shark to be caught in beach … END_OF_DOCUMENT_TOKEN_TO_BE_REPLACED 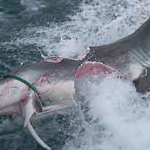 Travelers and locals in the Australian state of Queensland are caught in a real-life "Jaws" film after a MONSTER shark - perhaps measuring as long as 25 feet - was believed to have mauled another great white shark. As the picture shows, the smaller shark was bitten almost in two. The image –showing a great white bitten in half– is causing a buzz on the Web. The violent … END_OF_DOCUMENT_TOKEN_TO_BE_REPLACED 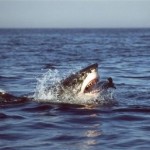 There's been a lot of Great White Shark activity in Southern California lately... sightings and video footage in Malibu, fly-fishing in San Diego, sightings in Northern Santa Barbara County, and more. To what can we attribute this sharp uptick in Great White Shark activity here in So Cal? How about El Niño?! NOAA's analysis of El Niño indicates that we can expect this … END_OF_DOCUMENT_TOKEN_TO_BE_REPLACED 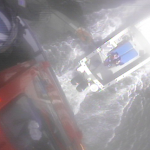 A Jackson man was bitten by a shark Saturday while fishing about 65 miles southeast of New Orleans, the Coast Guard reported. The man, identified only as 56 years old, was fishing aboard a vessel named Predator near Breton Island. Coast Guard Station Venice received a radio call for medical help from the Predator around 10 a.m. and contacted Coast Guard Air Station New … END_OF_DOCUMENT_TOKEN_TO_BE_REPLACED 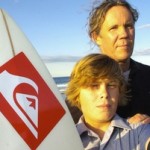 A teenage surfer has escaped with superficial cuts and a ripped wetsuit after being knocked from his board by a shark on the New South Wales north coast. The boy, named in media reports as 14-year-old local Zac Skyring, was out for an early surf off Broken Head, just south of Byron Bay, when he was knocked off his board just after 6am (AEST) today. He was reportedly … END_OF_DOCUMENT_TOKEN_TO_BE_REPLACED

KSBY 6 News is reporting that a shark advisory has been issued for Port San Luis and Avila Beach. Port San Luis Harbor Patrol says at about 9 a.m. Wednesday a sea lion was found with an evident shark bite. Harbor managers say a sea lion was attacked by a shark but at this time they do not know the location of the attack. As a precaution, Harbor Patrol has posted a shark … END_OF_DOCUMENT_TOKEN_TO_BE_REPLACED

Headless Seal Carcass Litters Malibu Coast: Harvey said he did not know what type of shark it was but did know i.. http://bit.ly/17AZUf # Discovery Channel (@Discovery) provides feeding frenzy for shark-obsessed http://bit.ly/dIj6L (via @sharksandlasers) # When are surf forecasters going to learn that hyping a swell is the quickest way to kill everyone's fun? Seems … END_OF_DOCUMENT_TOKEN_TO_BE_REPLACED

The headless body of a seal washed up yesterday afternoon off of the same Malibu coast where a shark was spotted Thursday. But county lifeguard Capt. Terry Harvey said there could be no connection between the shark and the seal. “There are all kinds of carcasses that wash up,” Harvey said. “It happens often. You can’t always relate it to that.” Harvey said he hasn’t … END_OF_DOCUMENT_TOKEN_TO_BE_REPLACED